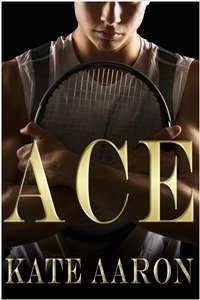 At twenty-two years old, World No.6 and England’s No.1, Brian Scagill has the tennis world at his feet. Last year’s semifinalist, this year Brian enters England’s biggest tournament determined to win. A Grand Slam on home turf is calling to him and he’s not going to let anything stand in the way of victory – certainly not a cute Croatian who doesn’t even play in the same league.

Fooling around with Lexi might be an easy distraction but the last thing Brian needs right now is to be distracted, and there’s more than this tournament at stake.

Before I go any further – a disclaimer of the sorts. I am obsessed with tennis, or to be more specific I am obsessed with watching it, I never played it even on amateur level. So for a fan who never played I know the sport pretty well – from the outside of course. I watch it and I read about it. I read many non-fiction books about tennis, but I wanted to read an m/m romance with a tennis settings and when I asked for recommendations from my book buddies these two books (this one and the sequel) came up first.

Let me say this, where tennis is concerned I thought the book was not just good but for the most part exceptional. The author either knows and loves the sport, or just did a superb job researching it and transported it onto paper well. I was amused, because too much tennis seemed to be an issue for several reviewers and I *loved every second of it*. Truly “different strokes to different folks” very much applies here.

“I won the seventh and redoubled my concentration as Meyer served for the eighth. His first shot was an ace, I barely had time to react before it was past me. Second serve he failed to repeat his performance in the first, hitting long for a fault. His next shot was placed more carefully and I made the return. As Meyer hit the ball I raced forward to the net in my first really aggressive move of the match. Wrong-footed, Meyer missed the return and I took the point from him. Fifteen-all.”

There is a lot of description of tennis matches (not complete matches of course, just some parts of it, the book is not a tennis manual but a romance between two tennis players after all) here, but still if you don’t enjoy tennis I would advise against picking up this duo of books.

As much as I am in awe of how well the author described the matches and the atmosphere around them, I cannot be sure as to how well the atmosphere on the tour is described, the psychology of the professional tennis player, etc. Brian narrates the book and he is a great character, very well described and when he talks about how grueling the life of a talented child who has a chance to make it on the tennis stage is, it does ring true.

However when, for example, he is talking about, overall, there not being that much homophobia on the tennis tour when he eventually comes out in the book (not really a spoiler I don’t think that the main characters came out eventually), well I want to hope he is right. However, the book was published in 2013. The year now is 2022 and there is still not a single openly gay or bi male player on tour. I am sure they all have their reasons not to come out (and they should not, if they don’t feel comfortable course!), but isn’t this the elephant in the room?

Anyway, as I said I really liked Brian and the book is also a romance so let’s talk about it. I didn’t mind that Brian and Lexi’s romance starts with being in lust with each other and we have a sex scene so early in the book. I did however wonder what they see in each other when they decide that they cannot live without each other after two weeks. They are both lovely guys and I liked them and in book two we do see that they are good together, but I think in this book, for me, the speed was a bit too fast.

I also did not care much for the only woman on the pages of the book being so extremely unpleasant. This is more of my cumulative issue with so many m/m books in the past, but I still didn’t care for it. To be fair the situation does improve somewhat in book two. She is not a caricature villain by all means even in this book, but in book two I guess the author gives her more dimension and attempts to make her at least somewhat more sympathetic.

The writing overall was great but beware of typos though. I always say that when I notice some I always start to worry that I missed more.

Sirius started reading books when she was four and reading and discussing books is still her favorite hobby. One of her very favorite gay romances is Tamara Allen’s Whistling in the Dark. In fact, she loves every book written by Tamara Allen. Amongst her other favorite romance writers are Ginn Hale, Nicole Kimberling, Josephine Myles, Taylor V. Donovan and many others. Sirius’ other favorite genres are scifi, mystery and Russian classics. Sirius also loves travelling, watching movies and long slow walks.

His curse can only be lifted with true love, but can true love come from a fake date?Being the personal assistant to a trio...
Read more
Book

What Janine is Reading: The Devils Series by Elizabeth O’Roark, Books One and Two

In September and October I read (or in one case tried to read) the first three books in Elizabeth O’Roark’s Devils series (book four...
Read more
Book

JanineConversationsmeet cute / meet-disaster2 CommentsJanine: Sometimes the first meeting between two protagonists is cute (they are walking their dogs toward each other and the...
Read more

Oslo has introduced a price ceiling of $60 per barrel for crude oil from Russia, the country’s Ministry of Foreign Affairs stated on Thursday....
Read more

His curse can only be lifted with true love, but can true love come from a fake date?Being the personal assistant to a trio...
Read more