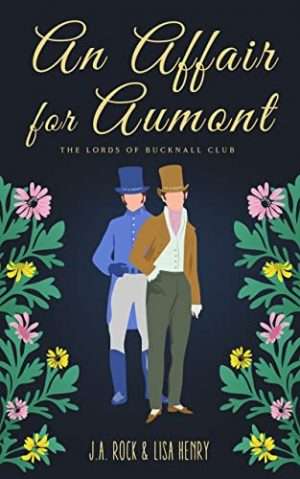 Four years ago, Louis-Charles Aumont, the Marquis de Montespan, chose duty over the man he loved. And then the man he loved chose death in service to England. Now, after finally cutting ties with his king, Aumont is living in a slum in Seven Dials–and intending to die there too. But when Bow Street Runner George Darling shows up at his door with a strange proposition, Aumont is intrigued by the prospect of something–anything–that might make him feel alive again. Or at least provide the funds he needs to drink himself to death.

All he wants is the love he couldn’t have.

George Darling joined the Bow Street Runners out of a belief in order. He accepts no bribes, indulges in no vices, and tries very hard not to dream above his station. If only Lord Christmas Gale hadn’t put that last one to such a test. Now that turning his thoughts from Lord Christmas only lands them instead on the handsome Frenchman with whom he recently crossed paths, Darling is more determined than ever to keep his head down and focus on his duty–until a knock on his door sends his life into disarray. Teddy Honeyfield, a former companion of Lord Christmas’s, is in need of a temporary bodyguard. Darling would never pass as the sort of gentleman Teddy requires…but he knows someone who might.

Neither wants to take a chance on a love that can never be.

When Aumont and Darling join forces to help Teddy, they’re not expecting to risk their hearts as well as their lives. Darling’s striking looks remind Aumont quite painfully of the man he’s lost, and Aumont’s title reminds Darling he has no right to desire a nobleman. But the rising threat soon drives them to flee with Teddy to the country–a journey that puts them face-to-face with their pasts while showing them a chance for happiness is within reach, if only they’re courageous enough to grab it.

This is the fifth book in the series. The characters from the previous books appear as secondary characters and even though each book features a new love story for the members of Bucknail Club, I think at this point I would not advise starting to read the series with this book. You won’t really miss much, but for example the main couple in this book did appear as episodic characters in the previous one. Darling, I believe, appeared in almost all of them (although I may be confused) though I am certainly not rereading at least two of the previous four, ever.

I am going to just briefly restate that if you want to read a historical romance, do not start this series at all because in my opinion this is not it. BUT if you want to read books that try to be Bridgerton but in the genre of m/m romance, this may be your cup of tea. To be clear, I had tons of fun watching Bridgerton and am certainly not disparaging it.

For me, the books that I liked in this series were books that did not really try to think too much about the world that they portrayed, but concentrated more on the relationship and whatever suspense/ mystery was going on in the narrative. again, I would not call these books full blown mysteries/ suspense either, far from it, however there were elements of it in each.

I think this book is probably my favorite one so far and this one, besides romance, also has a suspense element. As the blurb tells you, Aumont and Darling team up to help Teddy who has acquired a dangerous stalker. Lord Gale asked Darling for this favor and he could not refuse a former crush.

Aumont is mourning his long lost lover, who was also an older brother of Philip Sauden, and in the previous book we saw that Philip may have assigned to Aumont some intentions which Aumont did not display at all. Aumont loved Luke very much, but divided loyalties (or what he thought of as divided loyalties) led him to reject Luke’s marriage proposal. Luke went to war – and he went to war to die – and if one goes to war already intent upon dying that is what usually happens. Of course one can be killed at war no matter what, but Luke did not stand a chance. Of course Aumont regretted his rejection and of course he blames himself for Luke’s death and is not very intent upon living when the book begins, but somehow this case, and Darling, lead to him enjoying life more, eventually.

I thought Darling revealed an interesting character trait here, presumably he finally revealed his real self to us. We remember him as a prim and proper Bow street runner from previous books, but apparently George is really an idealist who believes in the utter goodness of the world and people around him. It is not the first time of course when, in one form or another, I encounter a character who hides his better traits in romance, but if I remember correctly usually such a character hides his better self because he encountered some kind of trauma/rejection from his crush/ boyfriend/ partner. Here Darling presumably presented the world a more gruff version of himself before partially to make an impression on Lord Gale. As we remember, it still did not work, but I thought it was an interesting revelation.

I thought the characters had lovely, lovely chemistry and some hurt/comfort was not overdone but very much well placed due to the grief Aumont still very much experienced. I really liked their interactions and once again thought that the secondary characters’ participation was well done and with each book these men become better and closer friends.

I especially appreciated that the authors took time to develop more one of the couples from the past books that I found especially annoying – what I considered a pair of superficial and spoiled children (Notley and Rivington). One can see that there are things in the world they both care about besides what they were wearing.

And I am thankful to these two for their pet sheep, which provided humor which I found very nice and again just enough of it.

“It was then that Darling noticed the sheep. A lamb, really, in that awkward phase just before adulthood. It was standing in a corner of the room, by a window, chewing on the rose-coloured drapes. “There’s… a sheep,” Darling remarked, to no one in particular. “Oh, yes,” Mr. Notley said. “That is Euphemia. Her name used to be Agnes, but then there was Lady Agnes, the murdering Bonapartist, so we had to change it.”

“Rivingdon stood out in his red uniform—a ridiculously bright shade for a uniform, Aumont thought with a pang in his heart, so easy to spot from a distance—with his husband Notley beside him. Notley had brought the sheep from last night, and had leashed it like a dog. It grazed contentedly. Hartwell and Warry were standing by them. Warry looked grave. Hartwell looked bewildered, but that was possibly due to the presence of the sheep.”

Sirius started reading books when she was four and reading and discussing books is still her favorite hobby. One of her very favorite gay romances is Tamara Allen’s Whistling in the Dark. In fact, she loves every book written by Tamara Allen. Amongst her other favorite romance writers are Ginn Hale, Nicole Kimberling, Josephine Myles, Taylor V. Donovan and many others. Sirius’ other favorite genres are scifi, mystery and Russian classics. Sirius also loves travelling, watching movies and long slow walks.

His curse can only be lifted with true love, but can true love come from a fake date?Being the personal assistant to a trio...
Read more
Book

What Janine is Reading: The Devils Series by Elizabeth O’Roark, Books One and Two

In September and October I read (or in one case tried to read) the first three books in Elizabeth O’Roark’s Devils series (book four...
Read more
Book

JanineConversationsmeet cute / meet-disaster2 CommentsJanine: Sometimes the first meeting between two protagonists is cute (they are walking their dogs toward each other and the...
Read more

Oslo has introduced a price ceiling of $60 per barrel for crude oil from Russia, the country’s Ministry of Foreign Affairs stated on Thursday....
Read more

His curse can only be lifted with true love, but can true love come from a fake date?Being the personal assistant to a trio...
Read more